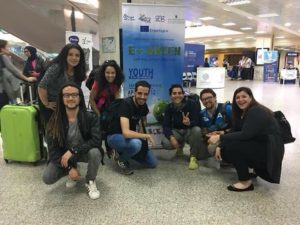 Before traveling, we met to discuss about the E+ Green project and we distributed the task to be done:

When we arrived to the Airport we met ShiShi (Yecin) from the Tunisian organization where we took the group photo and we went to Nabeul. In the first official dinner we met with others people with different background and countries where we integrating together and start sharing experiences. The day after, started on the beach by an ice breaker game. we had fun, we introduced to each other and we took photos. This game creates a bond between us and we start building friendships. Then we lunch our workshop by working in expectations, fears… everyone prepared his envelope (Facebook profile) where everyone can leave secret messages in his/her wall. In the environmental workshop, every group present the environmental situation in their own country. As Lebanese group, we highlighted on the problems as we highlighted on the natural resources that we had. Later we met Mr. Mohamad Benny (Founder of an environmental organization in Nabeul, Tunisa) where he present different environmental topic that enhance our knowledge in this subject. In same topic,we played a touristic game, we’ve been introduced to Nabeul from the Geographical, historical and natural side trough the passport game. We did a tour in Tunis the capital with the old souk, Sidi Bou Saiid the Tunisian Santorini and the Romanian city Cartage.this touristic visits allowed us to get more familiar with the Tunisian culture and historical background.

During the culture night each country prepared the traditional table, each country presented their traditions, culture trough dance, foods, drinks and costume. it was interesting, funny and friendly night where we discover some common traditions foods, drinks, behaviors and way of thinking between cultures, and we realize that what relate us is humanity, love and peace.

One of the most important activities we did, was when we reused some wooden pallets and rubber tires to make some furniture instead of throwing it. We were working as a real team. There were some of us doing the manual work, like cutting and fixing the wooden pieces, smoothing and painting, perforation of the tires, connecting the ropes and many other works. There was another group exercising their supervisory role and giving ideas and opinions, while the third group was taking some photos and filming some interviews with the workers to write a report at the end of the day. We were working as a team, everyone wanted to help to make this work perfect and if anyone of us asked for any tool or any help, everybody ran to help or give him what is needed.  The More important thing, we were working with joy and love. We were singing together, laughing, playing, taking some funny photos and enjoying our time. We were from six different countries, but we were working as one family. It was a very nice experience, adding a bit of experience and knowledge in our professional life, and indeed we felt that we had done something of high value, making things can be used instead of throwing them,  and the result was a fancy sitting room at the Youth Club (…… NAME OF THE CENTRE….)

The E+ Green summit in Nabeul was a very enriching experience. We were able to get to know participants from different countries around the Mediterranean Sea and North Africa. We were able to share environmental knowledge and personal opinions about various environmental topics such as Damns, Natural Reserves, Waste Crisis and even Conflict impacts on societies and cultures.  We enjoyed the workshops planned in smaller groups where we were able to learn more about the personal background and contact of the different members of the group which allowed us to understand each other more and work past our differences.  A challenge that I was faced with was the lack of time to be able to get to know all the participants on a more personal level .Nonetheless, we were able to exchange contacts and social media accounts to keep in touch.