A wonderful experience by one of the italian particapants during the Erasmus+ project “Take an active role- EMPOWER” in Enterria, Basque Country, Spain organized by Abarka. 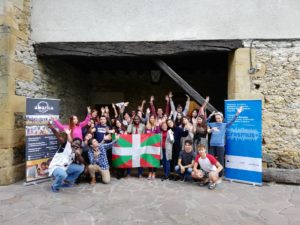 A group of youngesters from five different countries: Moldova, Russia, Spain, Italy, Romania took a part of youth exchange in Enterria where the aim of the project was to identify the common causes of intolerance and analyse persisting cases of non-toleance on the basis of culture, religion, gender, sexual orientation and race against various minorities. The project took 7 days of working with various interesting activities by an amazing trainer Kirill, where all particapant involved to think and express themselves into debates, simulation activities and interactive workshops on different types of discrimination. Every day we had great session where we learned a lot from each other, sharing idea and cooperate with very important topic which nowdays is very hard to discuss about it for the lack of knowledge, and open minded. It was really fascinating project, I got a lot knowledge and I still remember the intensity how all the group worked, for me it was more then youth exchange because it was not only sharing experience and information also learn from each other specially from who was leaded the activities. One of the best moment was when we learned the meaning of “Tolerance” from the official declaration of Unesco: Everyone should live the life in peace, specially in the way that they want!

The objectives of the project was to increase awareness among youth people from minority background, to empower youth to take an active role in local communities, to bring together people from different ethnic, to create space for dialogue and to raise their sense of belonging of Europe. As a participant, I don’t have words to describe the feeling that I had for each project as they different. Commonly, I believe that Erasmus + is wonderful way to connect people.